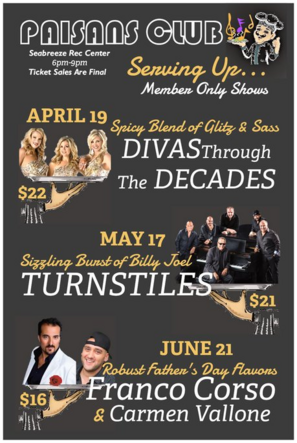 MAY 17 2020 (SHOW)
The Paisans Club will be headlining "Turnstiles" Billy Joel Tribute Band.  This eight-piece band with a three piece brass section is one of the premier Billy Joel Tribute Band in the country.  Featuring Tony Monaco as lead vocalist will perform many of Billy Joel hits.  Tony's performance will give you the feeling that you're attending one of Billy Joel's live performances.  His focus is simply on the music and delivering a faithful and completely live Billy Joel experience to share with others.  Turnstiles renditions of Billy's classic songs are certain to move the casual listener as well as the hard core "Joel fan" to their feet and have them singing along with all the classics.  If you're a Billy Joel fan or you just love classic Rock & Roll music, this show is for you.  Once again another Show you will only see at the Paisans Club.  MEMBERS ONLY $21

Headlining "Franco Corso" back by very popular demand.  Franco and his band will perform some of the most popular Italian songs that were ever written.  Franco is one of the premier Italian tenors in the country.  His voice melts hearts and instills passion.  Appropriately dubbed "The Voice of Romance".  His voice runs from baritone to tenor with magical qualities that seem to hypnotize and mesmerize his audiences.  It will be one of the Best Father's Day you ever enjoyed in the Villages.  This is the one show you don't want to miss.  Just another show you will only see at The Paisans Club.  After this show you will most likely be speaking Italian if not speaking it, you will be singing in Italian.    MEMBERS ONLY $16