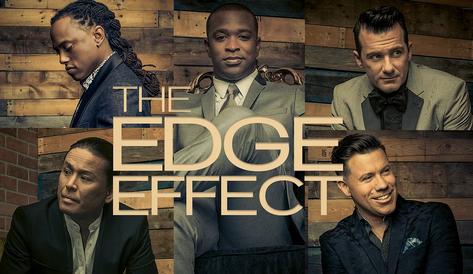 The Edge Effect are five unbelievable entertainers that have traveled the country with this electrifying show. Winners of MTV's "Top Pop Group" and Boyz II Men's "Next Great A Cappella Group", America's Got Talent finalists, and international recording artists, The Edge Effect is taking music to a  whole new level and in ways you might not expect.  This five-man vocal band, The Edge Effect combines pop, R & B, jazz, rock, and funk in a show unlike any other.  Having shared the stage with such superstars as Prince, Tony Bennett, the Pussycat Dolls, Stevie Wonder, John Legend, and Jay Leno to name a few, the members of The Edge Effect have mesmerized audiences throughout the United States and around the globe.  Once again just another show you will not see anywhere in the area but at the Paisans Club.  Seating is very limited.  COVID RESTRICTIONS STRICTLY ENFORCED.

TO THE EDGE EFFECT GROUP ABOVE

The five of you have spent a lot of time together over your years of performing. If you were to give each member a title, what would it be?
Troy - mad scientist
Danny -mr practical
Karl - payday karl
Sean - the idea machine
John - mr chill